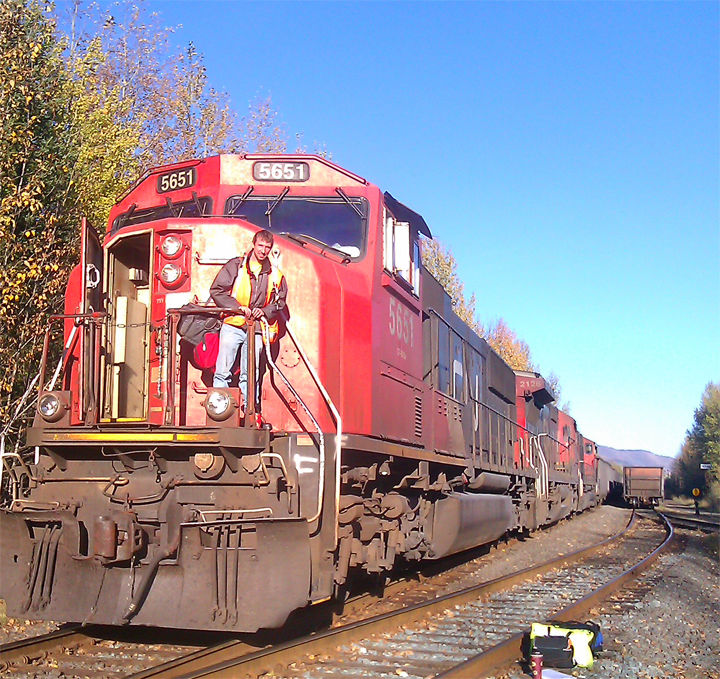 About Cameron the Old Testament! (Before I Knew God)

My family is a railroad family. My Grandpa came form England and resided in Jasper and began working for CNR in 1911, and completed his career with 52 years of service. My uncle also was a train master.

I had a natural love for trains. I lived by a railroad crossing in Port Coquitlam and at age 3 and I would go to the window and watch the trains in all my glory!

At about age 5, I wanted to become a locomotive engineer from the railway influence visiting my uncle in Jasper and from my Grandpas Retirement CN Plaque he had on the wall, where we visited mainly for Christmas celebrations in Victoria BC.

I loved CN and for what ever reason, and I knew instinctively in my heart I wanted to be an engineer and work for them.

I grew up with a very loving natured soul. Not perfect by far, but have that, "help you if I could attitude," and generally have always had that nature. Like many, I have learned what it is like to be taking advantage of more than enough occasions.

I was lucky enough to have Christian influence here and there as I grew up. Our family had the influence in both our english and french side and my mom brought me to church a few times as a kid. When I went to Ontario to meet an online friend helping me to get hired for CN, he took me to church once. Later on at age 25, I was hired for CN in BC in a remote location. A couple engineers were Christian and invited me over for times like Christmas and Thanks Giving dinner. I could say there was just something about the goodness I loved in the families, but my soul was totally separated, not being a true Christian and living in a mode of Sin and rejection. But there was huge appreciation for it.

The beauty to being hired by CN is I got hired on the BC Rail lines. CN took over BC Rail a year before. There is a whole store about that... Long story short, we were protected BC Rail employees under their contract and everyone else hired after my class were CN Rail seniority employees, and it took 10 years of my fighting for my CN Rail seniority and righteously won it.

So the beauty is BC Rail has not been automated. It has some of the most challenging, heavy grade territory and is a switching railway. The irony is I always wanted to be a locomotive engineer for CN Rail and I can be grateful for the fact I have never ran a locomotive in automation and ran these territories with some of the best spirited railway workers.

The basis for hope: I was told in Jasper when I was there working and living with my uncle that there is no hope in applying for the railway, there is no future in it because all the fibre optics are in place and there will be no jobs, it will be all automated. I never gave up and I was not going to let that stop me. I even took a BCIT course just to enhance my chances of being hired as an additional qualification. The thing is about hope: "Until there is no hope, then the dream is always alive!" Never quite following your dreams and passions and reaching for those goals.

This automation of our jobs on the CN Lines and all other major railways, was becoming a reality factor of the future. At some point when I was about 30. I really didn't find this future good at all for the direction of greed, but unfortunately inevitable. However, I did and still do see a viable give and take solution!

It is because of my dreams and love for the railway, I came up with "Railroading with Heart and Soul " and shared that with our manager in an Email when I expressed how automation should be a preventative guide for safety, but not to be used to take over and completely eliminate human life. Give us the controls and let us enjoy what we inspire about the job, the technology is there to prevent the rest. I shared it because of my dream for CN and being an Engineer is what kept me out of trouble and allowed me to care enough about something I loved to keep moving towards that goal in life. It's all we have left in life with our past, conductors and engineers and it resembles what railroading is and what the true remaining culture symbolizes. But our world is focused on let's trade that for a coupe more million and a few points on shares. Once you eliminate things there is no preserving any of it in man kind. Our only hope is preservation.

We need jobs to provide for our lives and have careers. We need to build careers around bettering lifestyles as money is only a product of function, that if we use it for all greed instead of allowing its function for our lifestyles all around, then we destroy life instead of make it better. Shareholders profit either way, but it takes the mind of a greedy person to move things further into elimination of jobs and peoples lifestyles. Sadly the future will come.

This is why we need God so badly and understand this earth is not our final destiny and what God truly is and wants for us in the end or what eternal life with him looks like. (Thank God!)

How God Came Into My Life With Conviction

15 years later 2020, I have 2 boys that are 5 and 6, and spent my career mostly in Prince George, B.C. I was not with the the mother for about a year at this time and she moved to the Vancouver area with the kids. A year later I sold my house and moved to be with the kids.

I had an asthma condition, I have been dealing with and decided to go for the lung biopsy that was recommended to me after being in the new area for 2 month. I have been procrastinating about going to church when I moved here.

I went for the biopsy and I didn't come out of the Anastasia properly. I had no real control of my body, or could really understand what was happening and why. I was strapped and I started to try and break out of the straps, and found out 6 days later I was in a coma. I didn't remember any of what happened when I woke up from the Anastasia until 3 days after I woke up from the a coma.

When I woke up from the coma I had no idea where I was or why. The first nurse I met named George was telling me to go to church. I woke up at dusk as the view out the window was magnificent with the city background. George told me I should go to church a few times as I was trying to talk to him and understand what was going on. I never seen him since. No idea what to make of it or if he was like an angel.

I also had this massive regret or guilt, that if I died, I never gave my kids God. I never talked to them about it, never mentioned the meaning or word, never took them to church and that was a huge regret in my soul. That was all I wanted to do the minute I was free from the hospital. Something in me really felt I needed to do this and it was the only thing that was important to me while in the hospital. I was still very out of the realm of reality this first day as the night progressed and I didn't know what was happening to me still at this point.

So that is what I did as I was roaring for life, happy and after 11 days in the hospital all told! I took the boys to church. I just wanted to give a little credibility back to God and as I write this now 1 year later, I never have thought I would have been the person I am today or would have been at the level of an evangelical Christian I am, and that grows stronger all the time.

Let me tell you, it was not without mass challenges, humiliation, a lot of pit falls waiting to consume me to try and take me away from this outcome and what is still to come. All in all, I found the glory of God in it, gained wisdom from caring and continue to grow that wisdom leaps and bounds and it is not perfect in life. it is a trial and how you learn to go through those trials with faith in God. What is remarkable is when it becomes more clear how these trials are adding up to things or look back at the sequence of events, or ask, is that all coincidence?

It is amazing what happens opening your mind and thinking for hours with attendance in church almost every Sunday, that I was able to write and speak intellectually and describe the holy nature of God, understand his plan and articulate his nature and character to others who may seek direction. Or those who may not understand why we are where are in this whole process today.

That is how Ace Global Wealth transformed from a financial website, that was not Gods will to one that is all about Gods will.

This whole story is told next in the New Testament of My Life, The beginning of the Church age for me. Transforming from a Non True Christian (Blind Sinner) to Following God and Jesus and Having the Ability to See Gods Plan and Speak the Wisdom in hopes others will see and seek Gods blessing as well. Above is my Before, and next is beginning 1 year After!

Let's Move on to the New Testament of My Life!